Register and Become a Member of NIG

Membership is instant once payment is recieved online!

Take advantage of our online library as a member

Online Payment for membership with your Visa/Mastercard

NIG uses secure and state of the art payment methods to ensure integrity of your data. 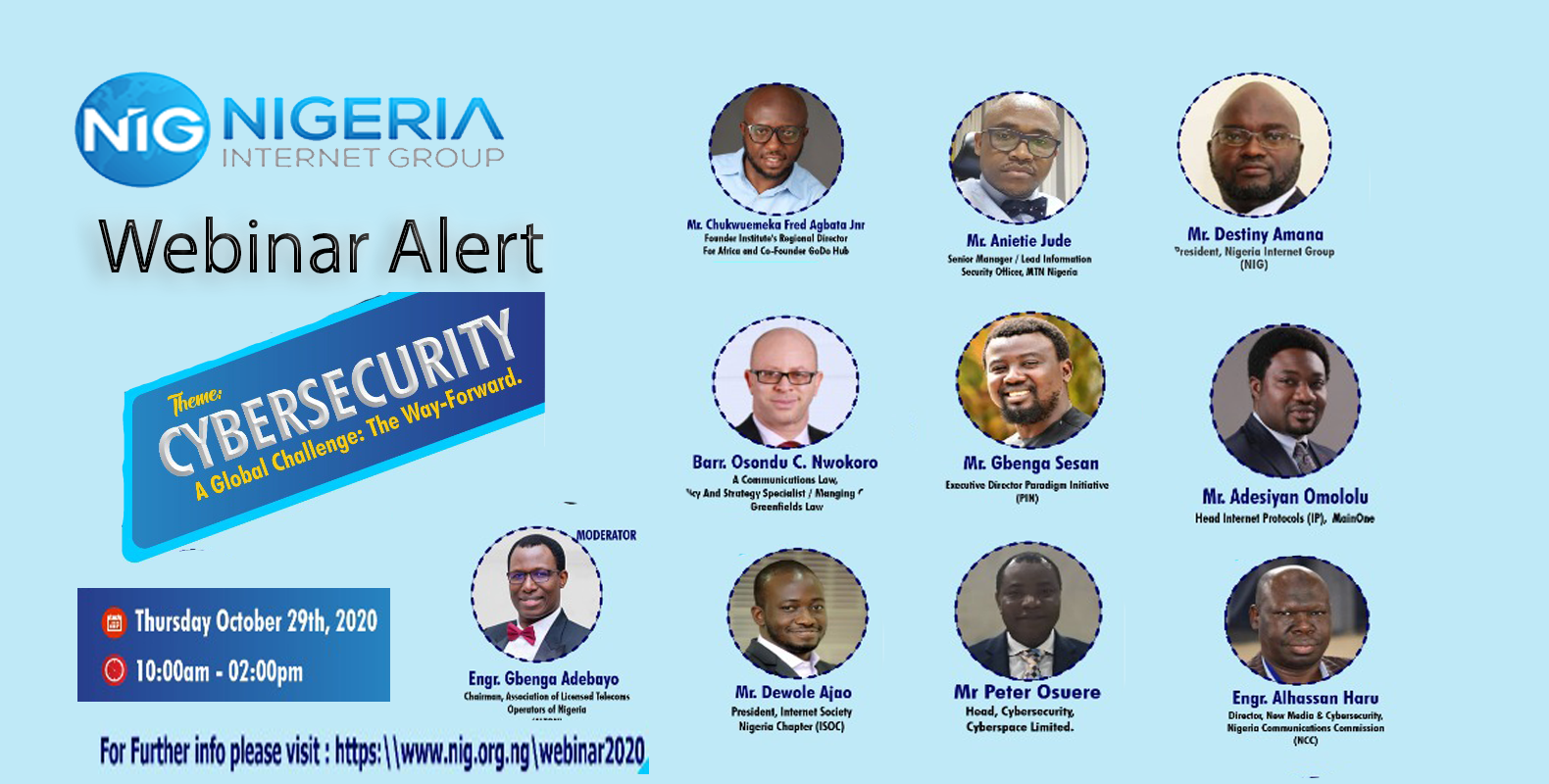 Thursday, October 29, 2020 @ 12:00:00 AM By Admin
Cyberspace is defined as boundless space popularly called the Internet, while the Cyber-security is defined as a body of rules put in place the protection of the cyberspace.  Cybercrime refers to series of organized crimes attacking the cyberspace which are in two (2) categories known as Assisted Cybercrime and Cybercrime respectively.
In the fight against cyber threat, several conferences, summits and stakeholders meetings have been organized in the past and presently all geared towards finding solution or seeking a way out in the fight against the threat.  We can say positive efforts have been made to identifying the threat and may be solutions, but however, the desired needed result have not been achieved in fighting or eradication of the threat at least to minimal level.
However, many organizations and regulator have during one conference or the other given assurance to redouble efforts in the fight against cyber threat. Others predict security measures that are likely to be significant in the fight against cyber threats in the year 2014 as follows:
One of the predictions made believes that Cybercrime that leverages unsupported software will increase, especially in the north and attackers usually find the easiest way to gain access to systems. The unsupported or un-patched systems provide easy access, since such systems have publicly known security flaws that have been exploited. Windows XP will no longer be supported by Microsoft by this April 2014 and software like Java 6 will no longer receive vendor support in 2014. What this means is that the vendors will no longer be able to provide security updates or any form of assistance. Given that, thousands of PCs / laptops in Nigeria are still running such software, they are likely to become easy prey to attackers.  Furthermore, some organizations with branches in the North especially the North-Eastern region of the country may experience challenges in performing the usual operating system and antivirus updates on their PCs due to the recent security concerns in this region and restricted access of the IT teams in some cases.
Organizations with centralized IT functions usually record a high failure rate when sending updates via the network to these regions due to network and bandwidth limitations. PCs with unsupported software in such regions are likely to form the weakest link in a companiesâ€™ network and one way to stay ahead in 2014 and beyond would be to migrate from unsupported or un-patched systems to updated systems that can provide increased and on-going protection. Many hackers will however migrate from banks to other targets, especially online shops and government portals.
However, others also predict that in 2014, the present year, that seven hottest skills will prosper ICT professionals and seven biggest trends in ICT will determine which organization survive, thrives or dies. Also will experience the most seven dangerous ICT Threats and indeed over-all benefit to Nigeria and Nigerians.
The ICT Regulator in Nigeria, Nigerian Communications Commission (NCC) have also assured that since the fight against cybercrime is costing the World over USD114 billion, that NCC will double its efforts to cracking  down on cybercrime in Nigeria.
The Nigeria Internet Exchange Point was not left out as they see cyber-crime becoming bigger than the global black market in marijuana, cocaine and heroin combined.  What about the Nigeria ICT Minister Mrs. Omobola Johnson, she says that it is already evidence that cyber criminals are already exploiting vulnerabilities and loopholes in national and regional legislation.
These and more are indeed serious challenges that Nigeria Internet Group is not happy with and so the need for this Webinar on Cyber-security. We also believe that solutions will be proffered at the end of the Webinar by the Cybersecurity Experts assembled to discuss and share on this fast spreading threat across the globe.
The Cybersecurity Webinar will afford the opportunity of examining critical issues such as, identifying the threat, way-forward, legal and Regulatory frameworks, Government Policies and Implementation, Agencies and Country Reports among others.

This Site was Designed,
Developed and Deployed by
Icecool Contracts Limited